A Season to Give

by Jalen Bazile on December 12

This is the season to give and COEC is doing their part in partnering with Outdoor Afro’s Colorado chapter. Outdoor Afro, a national non-profit has a mission to celebrate and inspire black leadership in nature and does an impactful job at dismantling the stereotype that black people don’t have a relationship with nature. As an OA Team Leader, I am able to do this by taking afro members into outdoor spaces with the comfort and security of being apart of a larger group that supports each member’s agency and self care. Late in the fall, I invited Outdoor Afro members from Denver and Boulder to our camp crag, Wildgoat, for a morning of introductory climbing. I had help from a few seasonal and year round COEC employees, such as Mark Rutberg, the co-director of Big Spring, who set up top ropes for our colorful climbing party. 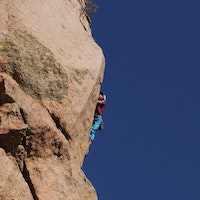 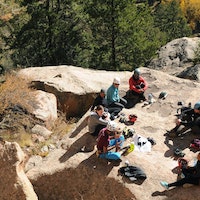 The group met at Costello’s Street Coffee, Florissant’s quaint brew house, and enjoyed a cup before the morning’s event. As we headed out to Wildgoat, I stopped along the way to point out the perimeter landmarks of COEC’s property, such as PPRS and Witcher’s Cattle Ranch. Once parked at the pull off, we gathered our gear and headed up the singletrack approach to the crag. When we arrived the sky was nearly cloudless, birds chirped and insects buzzed, and the rising rock faces of Pikes Peak granite were warming in the sun. Our group of half a dozen brown and black faces had the climbing area to ourselves.

As a minority group, learning how to climb at a private crag gave us a sense of solidarity and safety. The climbing culture at this moment in time is dominated by a very white male perspective that encourages constant competitiveness and pushing grades of climbing only a small percentage of people on Earth can accomplish. It leaves little room for other narratives - specifically those of women and people of color. The space that COEC can provide to these minority groups not only brings about different perspectives of outdoor recreation, it also shares the openness of camp’s spirit that is rooted in meeting people where they are and providing a respectful, open community where everyone can engage with the natural world.

We gathered on Lunch Rock with our harnesses, helmets and climbing shoes. Mark and I alternated explaining the risks and safety procedures, and walking everyone through the process of double-backing our harnesses and tying the proper knots. Once we showed the group how to belay and a few basic climbing techniques to get oneself up a face, we gave everyone time to practice. When people felt competent, the climbing began! With multiple top ropes set up along the crag, one by one our participants began climbing past their comfort zones, apprehensions, and fears. As each new climber tied in and start up the granite faces, others watching cheered them on with excitement! There was much admiration for the beautiful view out onto the far off mountain ranges.

At the end of our climbing adventure, we found ourselves circled up in a sunlit aspen grove, sharing our appreciation. The private outdoor space empowered us to push ourselves and take risks that we might have avoided if at a public crag. Due to our courage and desire to be together outside, each afro member walked away with a communal experience that raised his/her confidence and competency in the world of outdoor recreation. Events like these encourage individuals of afro communities to pursue more outdoor hobbies and share among their family and friends the benefits of being in nature. Outdoor Afro-Colorado thanks COEC for opening up its gates and inviting us to climb at Wildgoat. 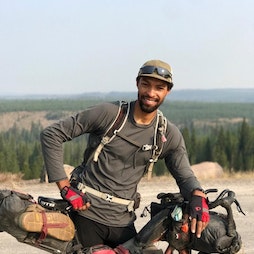 Jalen has been a counselor and Ridge Leader at Big Spring each summer since 2014. He has also been an instructor in the HTOEC program since 2015 and joined the year-round staff in 2015. He attended the University of Missouri and is a Community Team Leader for Outdoor Afro, as well as an organizer for the ACA, Rocky Mountain, EPIC (Emerging Professionals in Camping) group. Jalen’s program passions include mountain biking, hiking, and the arts.