by Emily Burnham on March 27

Name: Ariella Rogge Current Role: Co-Director of High Trails Tenure at Sanborn: Ariella spent 11 years as a camper and a staff member and then returned to Sanborn in 2001 to become the High Trails Program Director - she’s been here ever since. Fun Fact: She really loves when numbers in her life are divisible by 5. She considers it good luck!

What is your first memory at Sanborn? Ariella has a lot of clear memories from her first summer at High Trails when she lived in Silver Spruce West. On opening day, she got out of her parents’ 1978 Ford Country Squire station wagon, which would later become her first car, and saw Jane Sanborn waving at her from the Lodge. She remembers being shocked and excited that Jane knew her name. At age 12, Ariella and her cabinmate Molly were both very into Esprit. It so happened that they both wore Esprit t-shirts one day and they decided they would be good friends from then on (which they are). That summer, too, Ariella’s long trip was Buffalo Peaks. She recalls that, on top of the mountain, with all of the Collegiates in front of her, she truly thought she was in the Sound of Music - angels could have been singing and she wouldn’t have been surprised. It was a pretty amazing summer for her.

Silliest, most crazy thing you’ve done at camp? In 2008, when Ariella was pregnant with her second son Karsten, she pulled off a pretty memorable experience at the end of the session. At that time, the culminating horse competition, Gymkhana, was a competition between High Trails and Big Spring, and chanting the phrase “Beat the Boys” was a popular phenomenon. At the end of her speech at breakfast that morning, Ariella - who could make a rousing speech about truly any program activity and make it more fun - revealed “Beat the Boys” written on her belly. The crowd in the HT lodge went wild! It was unforgettable, and seriously silly.

Hardest camp trip? As a staff member, Ariella’s hardest trip happened during the year that the last Harry Potter book came out. Everyone was carrying a full version of the hardback copy on the Colorado Trail long trip - a 5-day! She ended up carrying at least 3 campers’ books on the first day of the trip because the campers were so distraught that they couldn’t bring them (and she had a copy of her own, too). One of her co-staff also wound up having a fever the night before the climb and had to hike out. It was Ariella’s most difficult trip both physically and a trip leader. As a camper, Ariella recalls her 4-day Puma Hills trip quite vividly. She thinks she and her friends were swimming or wading in a nearby water source when suddenly they saw all of the horses run away right past them. True to her helpful and resourceful nature, Ariella ran with her fellow campers to try to find the horses and bring them back. The only problem was that they were all pantsless from wading! She laughs as she pictures herself running up a hill in her underwear and cowboy boots. They did end up finding the horses at the top of a steep hill where they knew there was a gate, but the horses had already been tied up and penned. To this day, she still has no idea how that happened.

Favorite camp tradition? Year after year, session after session, Ariella really loves Closing Campfire. She appreciates the recognition of strength of the High Trails community, and can’t believe that we’re still writing prophecies, telling stories, and passing the candle from our oldest campers to our JCs. There’s a sense of tradition and consistency that comes with Closing Campfire that Ariella really enjoys. Plus, she just likes singing “Leavin’ on a Jet Plane” every session.

What song would you do at karaoke? She thinks that any Beatles song would probably be good for her - they have a low barrier to entry. If she was a singer, she’d like to do “Confident” by Demi Lovato. It has a good beat. 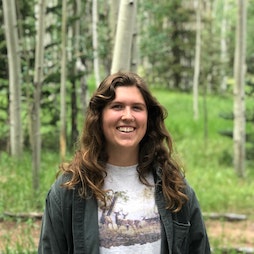 Emily has worn a variety of hats here at Sanborn over the years. She began as a camper, then worked on staff for four summers while affectionately known as “Edna,” taught as an instructor at High Trails Outdoor Education Center, and now works as the Assistant Director for High Trails. Her favorite things about camp include eating liberal quantities of chippy dippy bars, singing a little bit too loudly at Vespers, and watching campers accomplish incredible feats. She recently graduated with a degree in sociology from Colorado College and now lives at camp, counting down the days until summer each year.